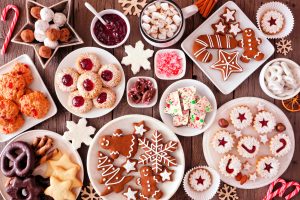 There isn’t a better treat to complement a glass of eggnog than a warm gingerbread cookie. The smell of cinnamon is a sweet reminder of holiday cheer and the warmth that comes with being with loved ones. Around the world, cookies are also a holiday treat, and different cultures enjoy their own traditional cookies. Gingerbread cookies or sugar cookies are traditionally baked around the holidays in America (and in some other countries as well), whether we’re leaving them for Santa or baking them for ourselves. But beyond these classic confections, other countries have their own recipes for holiday cookies. Here are some of our favorite:

Varying recipes for these treats with dulce de leche spread between two butter cookies are enjoyed throughout Latin America, but they’re especially prominent in Buenos Aires, where they are often served year-round as a treat to accompany coffee. During the holiday season, though, it’s tradition to bake alfajores with one’s unique family recipe.

These almond cookies are often made in the home during the holiday season and are also a staple recipe to help ring in the Chinese New Year. Ingredients include butter, sugar, sliced almonds, and an egg white.

These are popular around Christmastime and are made with delicious coconut and chocolate. The name literally translates to “coconut kisses” — how could that not be good? You can use sweetened or unsweetened coconut flakes for these.

This treat is extremely popular in Brazil. Brigadeiro cookies are delicious, sweet little chocolate balls covered in sprinkles. They’re perfect if you’re looking for a quick and easy dessert to round off your meal. And with only three ingredients, they can even be whipped up in a microwave!

These cookies are said to have been introduced to France in the 16th century by Catherine de Medici, who was raised in Florence before marrying Henri II. There are many different variations of the cookie — some include candied cherries, cornflakes, or oats.

These ring-shaped cookies are topped with colorful sprinkles — chocolate sprinkles for an everyday treat, and red and green ones for the holidays. They’re made with egg yolks, vanilla extract, an egg white, and, of course, a variety of sprinkles.

Gingerbread is pretty ubiquitous around the holidays in many parts of the world, but it was allegedly brought to Europe in 992 BCE by an Armenian monk named Gregory of Nicopolis. Later, settlers from Europe brought gingerbread to the Americas, where it became a holiday hit. Decorated gingerbread houses were a popular trend in Germany in the 1800s, apparently first inspired by the Grimm Brothers’ fairy tale “Hansel and Gretel.”

Joulutorttu are pinwheel-shaped Finnish holiday cookies or tarts that are traditionally filled with prunes or lingonberries. Making them usually entails a two-day process, where the pastry and filling are made on the first day, refrigerated overnight, and then assembled.

A vanillekipferl, also called kipfli and kipfel is a crescent-shaped cookie that is made with ground almonds, walnuts, or hazelnuts, flavored with vanilla, and dusted with sugar. The cookie originated in Austria, but is served throughout central and eastern Europe during Christmas time.

The koeksister (which literally translates to “cookie sister”) is a traditional Afrikaans treat prepared by frying dough strips in oil and then covering them in syrup. They were traditionally made at church celebrations or fundraisers.

Around the holidays, people in Poland bake jam-filled cookies called kołaczki, which may be round, square, or diamond-shaped. Poland, Croatia, and the Czech Republic all claim to have invented this traditional treat.

Called either lebkuchen or pfefferkuchen, this German cookie is softer than the traditional gingerbread cookie you may be used to and typically has honey and spices. It can be rectangular or round and has a sweet, slightly nutty taste. Similar recipes date back to ancient Egypt, but the most well-known variation of the cookie is the Nürnberger lebkuchen, from the German city of Nuremberg, where it was made into creative shapes and designs and decorated by a professional guild of gingerbread makers, the Lebkuchner Guild.

Mailänderli are lemon-flavored shortbread cookies cut into various shapes and sizes, and they are a traditional holiday cookie in Switzerland. They’re made with a simple list of ingredients: margarine, eggs, sugar, and a pinch of salt.

The addition of lemon gives these cookies a bright Mediterranean twist. They are crunchy and very buttery, a refreshing addition to your tea or coffee at a post-holiday feast.

Spanish shortbread cookies, called mantecados, are exceedingly crumbly. The recipe calls for cinnamon, lemon peel, and egg white, but the cookies are also flavored with anise.

Japan is a culinary goldmine, and it’s famous for having many interesting sweets and pastries that have become popular around the world. Matcha has become particularly popular — not only for its health benefits, but also because of its unique, earthy flavor. These bright green cookies are easy to make and slightly healthier than your average butter cookie, and they add a pop of color to any spread!

These egg-shaped cookies are very sweet, as they are dunked in honey and finished with nuts and cinnamon.

These treats are a little known culinary gem. They are really wonderful and simple to make: with a graham cracker base, an instant-pudding filling and melted chocolate on top. They are named after the city of Nanaimo, British Columbia, on Vancouver Island. The best part about making these is that they require no baking!

These biscuits originated in the city of Surat during the 16th century and are now popular throughout India and Pakistan. Often served warm with tea in the afternoon or after a large meal, they have a dense, buttery texture.

Similar in taste to a gingersnap cookie, a pepparkakor is made with maple syrup and is traditionally cut into the shape of a star or heart, although other traditional shapes include a pig or a goat. This Swedish holiday cookie is hung as an ornament on the Christmas tree. Another Swedish custom is to place a pepparkakor in the palm of your hand and make a wish. Then, using your index finger or thumb of your other hand, tap the center of the cookie. If the cookie breaks into three pieces, your wish will come true. If not, you’ll still have a delicious cookie to eat.

Pfeffernüsse (The Netherlands, Germany and Denmark)

Recipes for pfeffernüsse (which means “pepper nuts”) differ slightly depending on who you ask, but these tiny cookies, enjoyed during the holidays in the Netherlands, are commonly spiced with cinnamon, cloves, cardamom, and anise. Other ingredients include molasses, honey, and margarine.

These classic Iranian cookies are made with rice flour and a hint of rose water (a common ingredient in many Middle Eastern dishes), and tend to be quite crumbly. They’re often topped with poppy seeds for decoration, but it’s optional.

This iconic cookie that is also very popular in Scotland and Britain is often eaten on New Year’s Eve. They are buttery and delicious — perfect to enjoy with a cup of tea or simply as a comforting reminder of your grandparents.

Speculaas (Belgium and the Netherlands)

In the Netherlands, the Christmas season begins on the second Saturday of November and continues through December 6, which is St. Nicholas’ Day. In Belgium and the Netherlands, these spiced ginger cookies are elaborately cut and carved into depictions of St. Nicholas (or Sinterklaas, as he is called in this region) and other characters from stories about him by way of special wooden molds.

Small round cookies called struffoli are baked for the holidays in Italy. They’re also known as “honey balls,” and they can usually be found piled in a tree-shaped mound or arranged to resemble a wreath. Ingredients include honey, eggs, and margarine, but the treats can be topped with sprinkles, toasted pine nuts, silver balls, or candied fruits.

Snowmen, Christmas trees, presents, dreidels, and bells come out to play during the holiday season in the United States — all in the form of sugar cookies. It’s common to find elaborately iced, colorful cookies cut into seasonal shapes at holiday parties, and they’re often also given as gifts.

These nutty cookies are perfect for Christmastime. They’re rolled in vanilla sugar which gives them a great fragrance as well. The type of nut used can vary — both walnuts and almonds work perfectly. 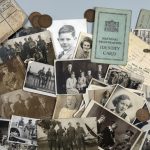 Family Tree Ideas You Can DIYUncategorized 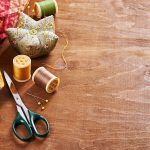 What’s New in Quilting? Quilt Trends to Watch Out for in 2022Uncategorized