A History of Sun Bonnets 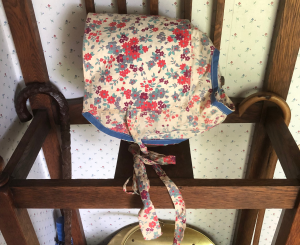 Because the prairie bonnet wasn’t actually a bonnet worn for fashion but instead for practical purposes, these bonnets have been around for some time. Their use peaked around the 1850’s, since after that time, hats became more fashionable and accessible. However, the women’s prairie bonnet remained in use for some time on farms and ranches until eventually almost all women wore hats instead of bonnets.

A women’s prairie bonnet was most often used by prairie women to protect themselves from the wind and the sun. ‘Proper’ women did not allow their facial skin to tan. A hardworking woman or girl always wore them from the start of their day to sunset as they were constantly outside doing chores. No matter where they went, whether to town and church or out in their yard, they would not be seen without one on their head. Should you have been able to be in their homes, you would not be surprised at a women’s prairie sunbonnet hanging on a post, or a door, always ready at hand to be put on at a moment’s notice.

They were considered a country woman’s bonnet because they were usually worn for ‘casual’ use such at the garden and outdoor work on a farm or ranch. They were simple yet sturdy and made from what was on hand. You might have seen a woman wearing a slat (split) bonnet, a button bonnet, a snap bonnet, or a gathered bonnet, which was one of the most common. For poorer women, many were made with scraps of material, most not even matching, then sewn together and filled with cardboard or the like to stiffen the brims. 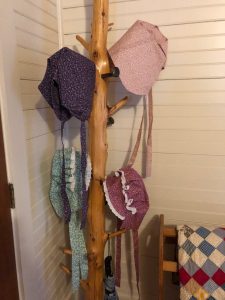 Most of these women’s prairie bonnets were serviceable, not decorative, and made with plain materials or scraps cut from dresses that were no longer wearable. Since they were worn outdoors for work, it didn’t matter that a bonnet could even be made of different pieces or colors of material. All that mattered was to cover a woman’s face from the fierceness of the sun.

Older women often would wear darker colors like a dark blue or brown. This unfortunately made the bonnet even hotter. Today, the replica bonnets are made with a lighter material and often much brighter, cheerful colors. Children and very young girls would get the brighter prints and bolder colors.

Many of us remember our grandmothers wearing these to work outdoors. Even today you will find women, young and old, using these gathered bonnets for gardening, protection from skin cancer, hiking, picnicking or even boating. They are easy to fit in a back pocket when not being worn, and easy to wash and clean. 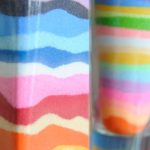 How to Make Summer Sand ArtUncategorized 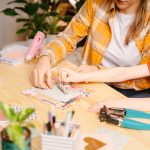