This month marks the 50th anniversary of the Apollo 11 mission, which famously sent the first humans to the surface of

the moon. In all this summer’s celebration of this accomplishment, and even if you’re a big fan of both topics, you probably don’t think that sewing and space exploration has a lot of overlap. But NASA’s own Karen Nyberg, International Space Station Expedition 37 Flight Engineer and lifelong lover of sewing, would tell you otherwise.

Nyberg arrived at the space station with Fyodor Yurchikhin of the Russian Federal Space Agency and Luca Parmitano of the European Space Agency in May of 2013 and returned back home to Earth on November 10th of the same year. Even orbiting 250 miles above the Earth’s surface aboard the International Space Station, when she had some spare time, the flight engineer picked up a needle and fabric and did a little quilting.

The astronaut, who has a doctorate in mechanical engineering from the University of Texas, was active on social media, sharing bits of her life on the space station with followers during the mission. On Twitter, she posted a photo of herself in her sleep station, surrounded by quilting supplies; her scissors, fabric, and thread were strapped to the wall beside her. On Pinterest, Nyberg posted a picture of a couple of fat quarters floating freely in the gravity-free air.

With her long hair floating above her head, she explained that the lack of gravity gave her some troubles with cutting, piecing, and stitching. “It’s far from being a masterpiece,” Nyberg said in a NASA video broadcast from space, holding up her red-and-white square with a hand-stitched blue star in the center.

Even better, she invited fellow crafters to join her in stitching together a global community space quilt. Nyberg and The International Quilt Festival collaborated on having star-themed squares submitted by fans stitched together with hers completed on the space station for display at the 40th annual International Quilt Festival in 2014 and at other public displays, as seen here.

It just goes to show you, when it comes to crafting projects, if you can dream it up, you can create it… and maybe the sky need not be the limit after all! 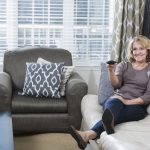 The Best Show on Television that You Aren’t Watching YetUncategorized 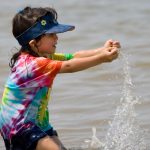